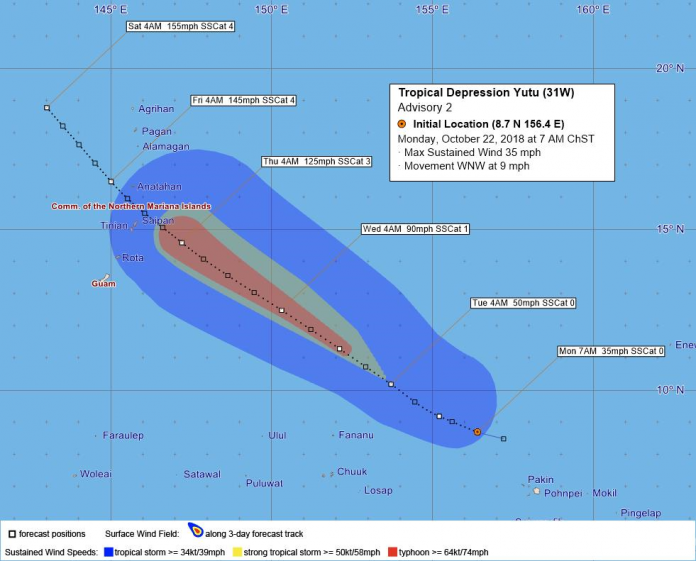 These sunny skies are somewhat of a calm before the storm with the slow approach of Tropical Depression Yutu, forecast to pass just South of Saipan as a typhoon as soon as Thursday.

Although it’s current track and level of intensity as it continues west-northwestward toward the region is uncertain at the moment, the NWS anticipates Yutu’s continued development within the next couple of days, possibly become a tropical storm by later today. It has also been forecast to pass just north of Saipan as soon as Thursday morning.

According to Guam Homeland Security’s Jenna Gaminde Blas on NewsTalk K57’s Your 4 Hour Phill, Yutu is expected to stay more than 150 miles away from Guam upon it’s closest approach. This she adds, was shared during NWS’s most recent briefing.

In addition, a release out of the U.S. Coast Guard, a Port Heavy Weather Condition X-RAY has been established for all four inhabited islands at 11:30 this morning. X-RAY means wind speeds as high as 39 mph are expected within the next 48 hours, with maximum sustained winds anticipated at 110 KTS paired with gusts as high as 135 KTS.

Tropical Storm Malakas to pass near Guam this weekend

Kammuri moving away from Mariana Islands; Guam remains in COR 2