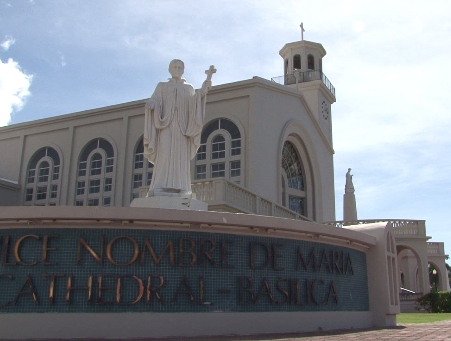 Guam – Another sex abuse complaint was filed in Superior Court against the Archdiocese of Agana, naming former Guam priest Father Andrew Mannetta as the alleged perpetrator.

The lawsuit is brought by a a 46-year-old man with the initials G.E.J. who claims Father Mannetta sexually abused him when he was about 14 years old at the San Miguel Church in Talofofo.

According to the complaint, G.E.J.’s parents sent him to live with Father Mannetta because he was rebelling against his parents.

G.E.J. says that on several occasions Father Mannetta ordered him to lie on his stomach and then would rub his buttocks and legs while watching television. Every time this happened, G.E.J. says the priest inched closer and closer to his genitals.

G.E.J. says this happened about 10 to 15 times before he left the rectory and finally returned home.

Like many of the victims represented by Attorney Anthony Perez, G.E.J. does not specify an amount he seeks in damages.

G.E.J. is one of over a hundred alleged victims to file suit against the Archdiocese of Agana accusing several priests, teachers and other church officials of sexual abuse.

Among the accused is Archbishop Anthony Apuron who was ousted and is also now facing a canonical trial. In addition, over half of the lawsuits involve former Guam priest Father Louis Brouillard who doubled as a Boy Scout scoutmaster.

All of the lawsuits allege decades-old sexual abuse. The civil claims became possible after the statute of limitations was lifted indefinitely.