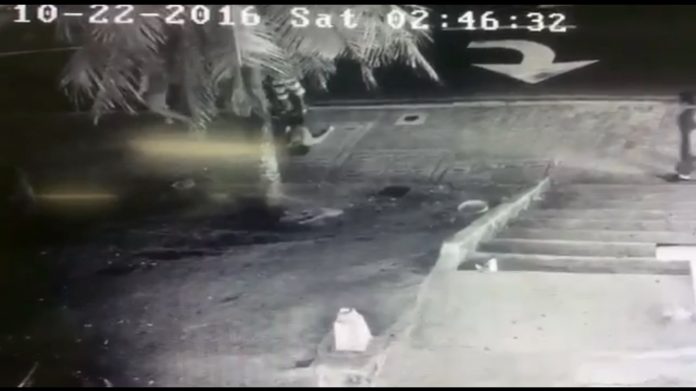 The CCTV footage shows that the attack happened on the northern end of Pale San Vitores Rd.

Guam – PNC has obtained the surveillance footage circulating on social media that purports to show the moment Brian Cruz was knocked unconscious.

It apparently happened on the sidewalk on the northern end of Pale San Vitores Rd.

The video shows what appears to be a shirtless Cruz coming in from the left side of the frame. He appears to lean forward, resting his hands on his knees. Then a man police have identified as Richard Ragadio, who is behind bars on assault charges, enters from the left side of the frame. Seconds later, another man is seen running up to Cruz and punching him, causing him to fall to the ground. A fourth man is then seen walking in as the man who knocked Cruz out drags Cruz from the side of the street onto the sidewalk.

Police have identified the man seen punching Cruz as Jaycee White and the fourth man as Alfredo Castro. In court documents, it states that Ragadio, Castro and White later carry Cruz out of view of the camera.

It wasn’t until later that police discovered Cruz in the backseat of a car, but not in Tumon where the video was taken—in Hagatna at the Linda’s Cafe parking lot. At the time, police were responding to a riot that Castro, Ragadio and White allegedly instigated.

Cruz was never seen in surveillance footage exiting the car at Linda’s or joining in the riot. This led police to believe that instead of calling for help, the three suspects left Cruz in the car as they went inside Linda’s Cafe. When the three were interviewed, police say they claimed to not have remembered what happened to Cruz because they were too drunk.

Cruz spent about four days in critical condition at the Guam Memorial Hospital. Sadly, he passed away yesterday morning at the age of 35. Police arrested Castro, White and Ragadio. White was charged with aggravated assault while Castro and Ragadio were charged with assault.

Both Castro and White have since posted bail. Ragadio remains behind bars.