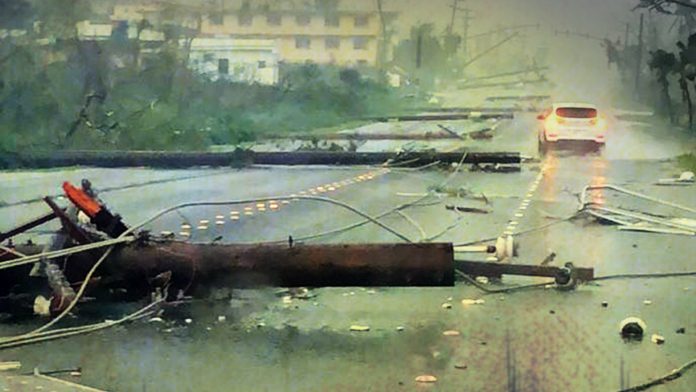 One dead, no count on the number wounded, and more damage than can accurately be assessed tonight, after Super Typhoon Yutu ripped straight through Tinian and ravaged Saipan early Thursday morning. Now an update as the CNMI picks up the pieces on the road to recovery.

Guam – The only typhoon fatality reported so far is a 44-year-old local woman who sought shelter in an abandoned Chalan Kanoa Village building that collapsed as the storm passed over Saipan.

The Commonwealth Utilities Corporation reports 200 to 300 downed utility poles, 400 to 500 leaning poles, and a whole lot of downed transformers and conductors. The CNMI government is now reportedly asking for 700 to 800 power polls, plus all the transformers and materials necessary to get power up and running again. The Commonwealth Governor’s Office reports, quote, “Water restoration is a power issue, and that will be prioritized first.”

“We wanna get those telephone poles out of the road so that our utility equipment and vehicles and trucks can start making their way to the water wells and power plants, so that we can get power and water restored. As far as emergency vehicles, we do have some villages on Saipan that are accessible, but most of them are not.”

Tinian Health Center was reportedly flooded, damaged, and inactive on Thursday, so medical outreach from Saipan is being activated.

“I’m glad that our communications are up at least for the island of Saipan,” Guerrero said. “I know for Tinian communications went down this morning (Friday), but as of this time I haven’t gotten the chance to reach out to those folks. And in Tinian –as bad as Saipan has been effected and as much as we are suffering–  Tinian is actually in worse shape.”

No commercial flight operations will be permitted until further notice, due to damage in both the international and commuter terminals. Tourists emailed PNC today, reporting they were stranded on Rota due to the storm.

“In our partnership with Department of Defense, they have been really instrumental and trying to get us up and running, and despite our infrastructure—getting stuff out…relief supplies…out to the public,” Guerrero said.

“On behalf of the CNMI Governor, the CNMI Government, and the CNMI people, we want to thank everyone in Guam for their generosity…to get donations and supplies to the islands of Saipan and Tinian.”