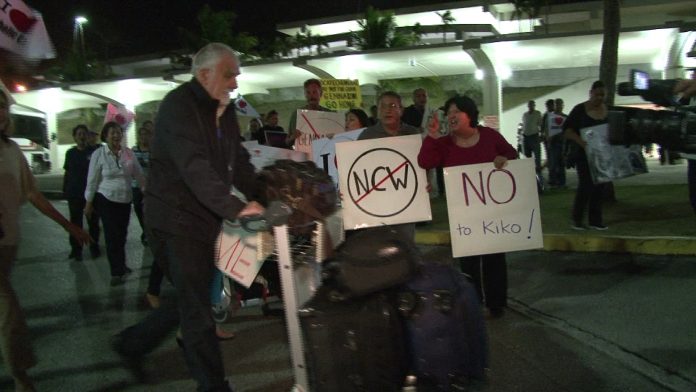 Guam – An angry mob of protesters hounding the leader of the neocatechumenal way in the us, Guiseppe Gennarini last night at the AB Won Pat International Airport.

The protesters, yelling in Gennarini’s face, say they’ve had enough and they won’t back down to someone they believe is trying to overthrow their beliefs.

It was a riotous scene of angry mobsters made up of mostly Catholic man’ amko last night. At first just a few dozen showed up with signs. Just outside the arrival gate at the airport, the protesters were chanting and singing.

But as soon as Gennarini and his followers walked out the double doors, it turned into violent screams. Some were even yelling words like, “Satan go home! You’re satan!”

But not a word from the rattled and unwelcomed visitors. Gennarini, who’s responsible for spreading the neocatechumenal way in the United States and now Guam, is being blamed for causing the division within the Catholic Church on Guam.

Many Catholics accuse him of manipulating Archbishop Anthony Apuron into giving away the disputed Redemptoris Mater Seminary to the Gennarinis for the purpose of perpetuating their teachings—teachings that go against the traditions of the local church.

“I think that Chamorros are very welcoming people but I think we’re also tired of being walked all over and being abused by this archbishop and this diocese,” says Vangie Lujan, a member of the Concerned Catholics of Guam.

PNC: “Some might say that it was a little abrasive. Lots of yelling. A lot of screaming at the Gennarinis when they arrived. What would your response be to that?”

“I think that we have been very patient. This has been three years in the making,” says Lujan. “If we have to stand up and make sure that the people that are running our church understand that we are serious about our concerns and what we want, we’re willing to do that.”

“Protesters, individuals that come here, they come here to usurp our religion and to undermine our catholic faith and our tradition and honestly we are very tired of it,” another protester, Jerry Taitano, says.

Prior to Gennarini’s arrival, we had the chance to talk to Fr. Edivaldo, one of the priests who preaches neocatechumenal teachings, and who has been accused of having sermons that are too sexually suggestive.

“This is just one percent, less than one percent of the catholics on Guam, they do not represent the catholics, the ones who are here, very few, of course, few people make noise but we are not disturbed by it,” says Fr. Edivaldo.

“The church for a charisma to prove that it is valid, always persecution, misunderstanding has always belonged to the history of the church so we don’t fear,” he adds.

The protests continued this morning outside the gates of the RMS property in Yona. We did not get a response to our request for comment from the archdiocese as of news time.