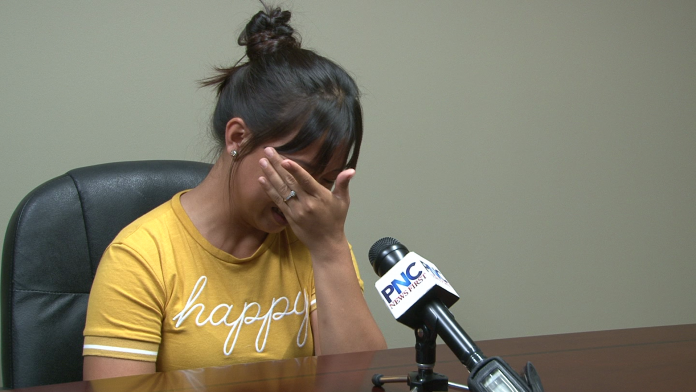 Guam – Last week we brought you the story of a young mother, Alissa Nededog, whose intestine was accidentally cut during a c-section, causing her to develop a massive infection that spread throughout her body and forced a prolonged stay at the Guam Memorial Hospital.

After hearing Alissa Nededog’s heart wrenching experience during a c-section, April Guerrero contacted us, telling us she could no longer hide her pain. She, too, wanted to come forward and share her painful experience. Just speaking about Alissa’s story brings April to tears.

“When I was reading Alissa Nededog’s own…,” April says, choking on tears, “her story, I couldn’t finish it. My other half had to take the phone away from me.”

It was in March 2016 that April was pregnant with twins. It was her third pregnancy and would be her second c-section. Her pregnancy was rather normal and she was already scheduled for a caesarian section.

But her twins decided they would come early. Her water broke and she was rushed to GMH. On the way there, she contacted her OB/GYN who told her to head to the ER and she would meet her there. But for whatever reason, her doctor didn’t arrive right away, despite knowing that her patient’s water broke.

April waited for hours and those hours eventually meant that she had dilated to the point where she could no longer wait. She began to push.

“I delivered the first twin vaginally and then the second one, they were actually 13 minutes apart,” recalls April.

The second one became an emergency situation. Her second baby’s heart rate dropped, then disappeared. Doctors could no longer wait, they had to operate to save the baby’s life. Fortunately, baby girl number 2 survived.

But that wouldn’t be the end of the horror for April. It was just the beginning.

“I just remember waking up in the recovery room,” says April, adding that by this time the anesthesia had worn off. “I was yelling in the hospital like, I’m hurting.”

She didn’t know it then but April’s bladder was accidentally cut during the c-section and before anyone could realize it, she was sewn back up.

For two to three days, April’s recovery was unusually slow. She didn’t meet all the markers of a normal recovery from a c-section, like being able to walk, urinate or pass gas. Despite these failures, April was sent home from GMH.

For four days at home, April was in excruciating pain, unable to urinate and unable to lie down flat. She says instead of shrinking, her belly grew even bigger. It was hard like a rock and her veins were popping out.

“When I went back into the house from the balcony, my son ran to me, my oldest son he’s 7 years old, he ran to me to hug me and right when he put pressure to my stomach that’s when I started screaming. I went in shock,” April tells us.

That’s when April was rushed to the emergency room at GRMC. She ended up staying at the hospital for several weeks where painful tests revealed April’s bladder was cut and urine was leaking throughout her body, even injuring her kidney.

“The urine, she said lucky thing I came in because I would have went into shock and convulsion or possibly pass out because she said the urine is poisoning my whole body,” explains April, referring to the information provided to her by attending physicians at GRMC.

Although she was able to recover through a second surgery to repair her damaged bladder, April continues to suffer from complications of those surgeries. Once physically active, she’s now unable to so much as jog or sprint. She can carry her twin girls, Autumn and Auburn, but not for long periods.

To make matters worse, no matter where she turned for help to get justice, she was turned away, given excuses as to why her case could not be taken seriously. One doctor told her cutting a bladder during a c-section is common. April would get no relief.

“If it’s common to cut me, my bladder, it’s not common to not know about it and fix me up. It’s an accident, but fix it. Why would you sew me back up and release me? I could have died and never knew. So that’s what I don’t understand till this day. I never got answers. I just feel like no one wanted to listen,” she says.

Although she forgives the doctor who allegedly made the mistake, it still hurts to think about everything she went through. Despite efforts by the doctor to contact her, April says she’s avoided speaking with her.

“I don’t talk about it,” says April, crying as she cups her face. “I just prayed. Forgive me, Lord, if I’ve ever done anything wrong but I don’t deserve this. And forgive me if I’ve ever hated anyone.”

April says she later learned that the doctor who accidentally cut her bladder was inexperienced in c-sections and preferred delivering vaginally.

She also tells us that she received a bill from GMH and from GRMC even though she was a Medicaid recipient.

April sought the advice of an attorney but was told that she would need to have at least two physicians testify on her behalf. Without that commitment, April eventually stopped pursuing her malpractice case.

6 COVID-19 cases with variants of concern identified on Guam, including 1 South African variant