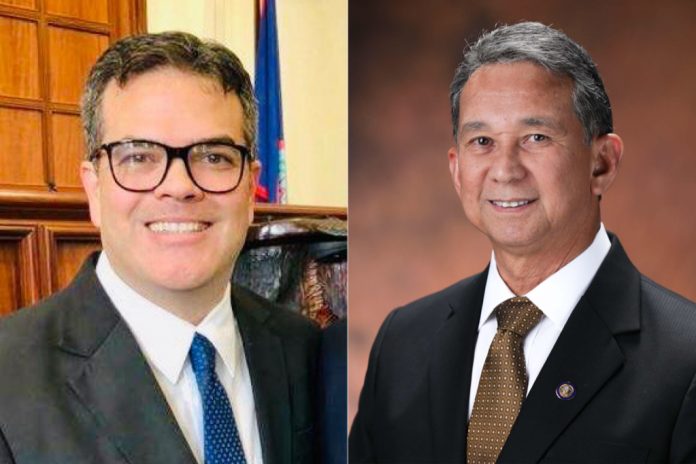 Guam – More appointments have been announced by the incoming Leon Guerrero-Tenorio administration, this time for the Port Authority of Guam, Guam International Airport Authority and GHURA.

Headlining the announcement is Former Senator Rory Respicio, who will be joined by Dominic Muna and Connie Jo Shinohara in running the Port Authority of Guam. Senator Tom Ada will be managing the Guam International Airport Authority and Ray Topasna will be at GHURA with Elizabeth Napoli as his deputy.

Governor-Elect Lou Leon Guerrero acknowledged that these autonomous agencies are critical to providing basic services and advises that it’s equally critical that the right individuals to lead them.

Read the release from the Leon Guerrero-Tenorio transition team below:

Hagatña, Guam – Governor-Elect Lou Leon Guerrero today announced her intent to appoint the following individuals to cabinet and subcabinet positions for the incoming Leon Guerrero-Tenorio Administration. Upon assuming office, Governor-Elect Leon Guerrero will formally transmit their nominations for confirmation to the Guam Legislature as well as submit recommendations to the respective Boards of the autonomous agencies. Nominees will serve in acting capacities pending legislative confirmation.

“These autonomous instrumentalities of our government are critical to providing basicservices to our people daily and it is equally critical that we appoint the right individuals to lead these agencies. Lieutenant Governor-Elect Tenorio and I are honored to announce the appointments of Senator Tom Ada, Former Senator Rory Respicio, Ray Topasna, Connie Jo Shinohara, Dominic Muña, and Elizabeth Napoli to these leadership roles,” said Governor-Elect Leon Guerrero. “Each of them recognize the great challenge ahead of them and they are ready to serve.”

“Our nominees are prepared to lead these agencies on day one. They are up to the task inthese agencies as we set course for greater fiscal responsibility and performance,” said Lieutenant Governor-Elect Tenorio.

The nominees and respective agencies are as follows:

Former Senator Rory J. Respicio served in the 27th through 33rd Guam Legislatures and held various legislative leadership positions including Majority Leader and Chairperson of the Committee on Rules; Federal, Foreign and Micronesian Affairs; Human and Natural Resources; Election Reform; and Capitol District. Prior to being elected senator, Respicio served as Director of the Department of Youth Affairs (DYA) and under his leadership DYA achieved numerous awards and recognition including being named Department of the Year for three consecutive years. He also served as a senior staff member for Governor Carl T.C. Gutierrez, where he handled constituent services and provided support for First Lady Geri Gutierrez’s community-based programs and her People Helping People non- profit organization. Senator Respicio has a Bachelor of Science Degree in Government and Politics with a minor in English/Business and Management from the University of Maryland University College.

Mr. Muña has spent nearly 30 years serving the people of Guam with much of his career at the Department of Public Works (DPW). He most recently served as DPW Building Maintenance Manager and also held the position of Superintendent of the Solid Waste Management Division. He also has served as the Assistant General Manager of the Guam Mass Transit Authority, the Deputy Director and then Director of the Department of Parks and Recreation, and the Operations Manager for the Office of Senator Tina Muña Barnes. He has spearheaded multiple islandwide beautification projects, including post-typhoon cleanups and Liberation- related festivities. Mr. Muña and his family reside in Mangilao, where he is also a member of the Mangilao Municipal Planning Council.

Ms. Shinohara is a small business owner and the managing partner of Takekuma, LLC. She has extensive experience in both the public and private sectors, having served as a Special Assistant to Governor Carl T. C. Gutierrez and as a Special Projects Coordinator for the Bureau of Women’s Affairs, Director of the Typhoon Paka Recovery Office, and Interim Director of the Department of Administration. Her private sector experience has centered on management and financial services on Guam and in Washington state. Ms. Shinohara is an active church volunteer at Our Lady of Lourdes Parish in Yigo and at the Archdiocese of Agana, where she currently serves on the Independent Review Board for the Archdiocese.

Senator Ada’s combined career experience in the public, private, and military sectors are major contributing factors in his ability to bring a balanced and practical approach to the analysis, resolution, and management of issues in his new assignment as the Executive Manager at the A.B. WonPat Guam International Airport Authority (GIAA). Senator Ada returned to Guam in 1983 after completing his Undergraduate and Graduate studies and serving 6-years of active duty as a commissioned Infantry Officer in the U.S. Army. He completed Graduate studies in Public Sector Management and Regional Planning & Analysis at Indiana University. He has served as Deputy General Manager for Guam Waterworks (formerly PUAG), General Manager for Guam Power Authority (GPA), and Commissioner on the Consolidated Commission on Utilities (CCU). He is also a nine-term senator. Senator Ada has also held senior management positions during his eight years in the private sector and completed the Professional Master of Business Administration (PMBA) studies at the University of Guam. He served as a citizen-soldier in the U.S. Army Reserves for 20-years and retired as a Colonel (O-6).

Mr. Topasna retired as Special Assistant to the Governor in 2016 after serving in this capacity for 3 years. Prior to this, he served as Deputy Director and Executive Director for the Guam Housing and Urban Renewal Authority (GHURA) from January 2011 through November 2012. While at GHURA, the Authority received its first and only clean audit in 57 years. Mr. Topasna was also chiefly responsible for updating GHURA’s Classification/Compensation Study, Personnel Rules/Regulations, Section 8 Admin Plan, and Public Housing Admissions & Continued Occupancy Plan. Prior to GHURA, he served as Chief Planner for Guam International Airport Authority (GIAA) for 16 years and oversaw the BRAC transfer of Tiyan to GovGuam and the Airport. Mr. Topasna has a Bachelor Degree in Business Administration from the University of Guam and obtained an Airport Management Diploma from the International Air Transportation Association.

Ms. Napoli has 30 years of work experience in the government, as well as 12 years of work experience in the private sector. She has been a Speech Therapist with Guam Department of Education, which required ongoing communication and collaboration with an education and interdisciplinary team of professionals and families to meet the needs of students with communication impairments. Her provision of services also entailed working with central office personnel, administrators, and support staff at numerous elementary and secondary school sites; evaluation and progress report writing; meeting reporting deadlines; and maintaining professional standards through ongoing education. Prior to government service, Ms. Napoli had six years of work experience as Client Services Manager for a financial planning office on Guam and six years of work experience as an Administrative Assistant for a marketing office in San Francisco’s financial district, which gave her valuable insight into the necessary work ethics, discipline, problem solving, communication, organizational, and people oriented skills critical to ensuring customer satisfaction while at the same time meeting company/corporation performance standards. Ms. Napoli is a graduate of the Academy of Our Lady of Guam and received her Bachelor of Science Degree in Speech and Hearing Sciences from the University of California, Santa Barbara and a Master of Science Degree in Communicative Disorders from San Francisco State University. She is currently a member and newly elected Secretary of the Marianas Association of Speech and Hearing Professionals (M.A.S.H.P.). Ms. Napoli was also a Secretary of the Parent Advisory Board at Father Duenas Memorial Catholic School for 8 consecutive years.