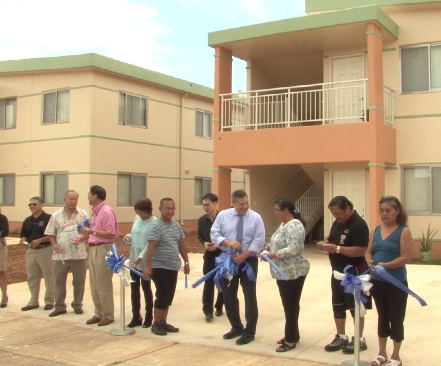 GHURA and CoreTech International have teamed up to build Summer Town Estates III in Dededo by 2019.

Guam – The Guam Housing and Urban Renewal Authority has partnered with CoreTech International to open Guam’s newest affordable residential community and to break ground for their next project.

The ground-breaking ceremony was for the Summer Town Estates III project, which will be open to over 60 low-income families. A release from Adelup states that over 2,000 affordable homes have been built during the Calvo-Tenorio Administration. In the release, Lt. Gov. Ray Tenorio says homeownership is a dream for many Guamanians, and projects such as these help make the dream a reality.

“Since the start of our administration, we’ve been dedicated to developing affordable homes for our people,” Lt. Gov. Tenorio stated. “The most recent of the two projects will provide more than 150 homes for our local families, but the grand total of the Summer Town Estates is about 400 new affordable homes.”

Gov. Eddie Calvo was the keynote speaker during the ribbon cutting and ground breaking ceremony, and said his administration had a goal of 3,000 homes to realize the Guamanian dream of having a quality home, whether it be owning a $450,000 house or paying $600 per month to rent a unit. But with projected cost of $24 million and a target completion date of no later than 2019, the H-2B Visa denial crisis is an issue Gov. Calvo wishes to resolve.

“I am constantly in communication with the Trump Administration. We’re doing everything that we can during our power to make this known about what this decision that was made in the Obama Administration, how it has had such a negative impact on this island,” said Gov. Calvo. “And I intend to work as best I can with all my efforts so that we can see a change. I know there have been several applications for a fairly large number of H-2 workers. I want to identify these projects for folks such as the Department of Defense and Homeland Security so that we can see this reversal of such a destructive act that occurred in the waning year of the Obama Administration.”

The ribbon-cutting ceremony was held for the official opening of Summer Town Estates II, which is already fully leased to over 90 families. The housing community boasts a community center, after-school programs, a fitness center, and a swimming pool. The project costed about $29 million. But Leasing Manager Manuela Cruz says there are other housing communities available to low-income families, senior citizens, and persons with disabilities. Guam Facilities Foundation, Inc. is the property manager of Summer Town Estates, and are readily available to answer inquiries and take applications.

Cruz adds that anyone interested in applying for the affordable housing program can visit the GFFI office in the Summer Home Estates Community Center in Lada Dededo, on weekdays from 9 a.m. to 5 p.m., by calling their office at 646-5800, or by visiting their website at gffi.net.