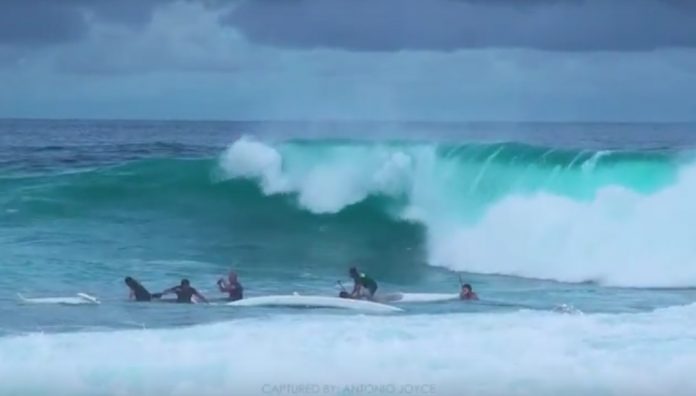 All six paddlers aboard the canoe that capsized made it back to shore safely.

Guam – An amazing rescue of paddlers was caught on camera yesterday and while it’s fortunate that all 6 survived, officials are warning residents about the hazardous conditions of the island’s waters.

“These paddlers are very, very lucky. It could’ve been a whole different situation for their friends and family today,” said Meteorologist Landon Aydlett, who happened to witness the entire even.

The dramatic footage caught on camera and shared with PNC shows six paddlers on a canoe out in waters near the Hagatna Boat Basin. It shows the paddlers being eaten up by a large wave as they attempt to make it back to shore.

As inviting and adventurous as it looks, unfortunately, Guam’s waters are known to be quite unpredictable. As seen in this video, despite their best efforts to escape the rough waves, eventually the waves catch up to them.  The canoe capsizes and the paddlers are thrown off the canoe. The swimmers struggle to make it back to shore.

Guam Fire Department Spokesperson Kevin Reilly says they responded to the scene around 6:25 pm and pulled three men on board while three others made it safely back to shore.

Aydlett says this is exactly why the National Weather Service issues advisories. On Monday, advisories were issued for Guam, Rota, Tinian and Saipan for high surf and small crafts.

“When we have these advisories, it’s for a reason; it’s because there are dangerous conditions out there that pose a risk to loss of life and property. For this situation it’s the large waves and life threatening rip currents. If you’re caught in these waves and these rip currents you could lose your life,” said Aydlett. “It’s a calculated risk to go out there and your calculations are wrong.”

Aydlett tells PNC that often people mistake dry weather for calm seas. When there are advisories out there, this is never the case.

“What’s a misconception with a lot of the tourists out here, they don’t realize the dangers of the seas and the surf, especially if they’re form inland areas of Asia or the United States–military members. So when the skies are sunny and the weather’s dry, but the waves are huge, people may not realize the dangerous currents out there,” said Aydlett.

These advisories for high surf and small craft remain in effect until Friday, says Aydlett. For Guam and Rota, hazardous surf can be expected in north facing reefs which will peak today near 14 feet. Surf may also become hazardous for east facing reefs. As part of this advisory, the NWS advises to avoid venturing near exposed beaches, especially those facing north.

“These winds along this frontal boundary will start to subside gradually and the seas will start to calm down just a little bit but we’re gonna be seeing these advisories continue probably at least into Friday morning, if not into Friday afternoon,” advised Aydlett.

Port Authority AHAWS siren to be tested this afternoon

Governor wants to be included in talks about evacuation of Afghan...

Michael Castro’s mom comes to grips with her son