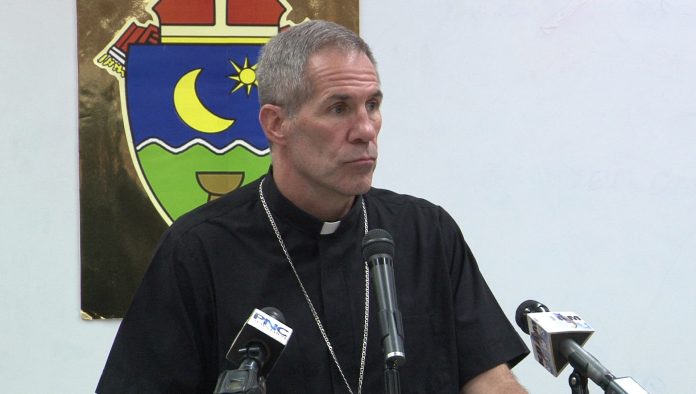 Guam – Some major developments happened at the Archdiocese of Agana last month as Archbishop Michael Byrnes has gotten rid of four key players who are a part of the Neocatechumenal Way from his Presbyteral Council. The reason? Insubordination.

It’s an unprecedented move for rookie Guam Archbishop Michael Byrnes, but it demonstrates his fortitude and resolve to keep his flock at bay and clean house.

The letters, separately written, had similar text: “Effective immediately your membership on the Presbyteral Council of the Archdiocese of Agana is terminated because of insubordination.”

Catholic blogger and close observer Tim Rohr was on Mornings with Patti on NewsTalk K57, giving his take on the surprising move.

“Byrnes makes note that he was stabbed in the back. Essentially ‘insubordination’ tells us that these guys didn’t tell Byrnes anything,” noted Rohr.

The source letter Archbishop Byrnes was referring to was written to Cardinal Fernando Filoni on June 27. In it, the four priests express their concern about the Archdiocese of Agana’s recent announcement that it intends to put the Redemptoris Mater Seminary property up for sale in order to fund monetary damages the church may be subjected to as part of the scores of civil sex abuse complaints.

“Specifically, by writing directly to His Eminence Cardinal Fernando Filoni on June 27, 2017, instead of properly directing your concerns to me, you have defied my leadership and betrayed my trust,” Byrnes termination letter also reads.

Rohr says Byrnes had been warned about trusting the four priests to be a part of his Presbyteral Council.

“Of course Byrnes himself said he came here to make peace, reconcile, listen to both sides. I’m kinda glad that it happened because he needed to be stabbed in the back to understand just what these guys were really all about,” said Rohr.

The council is a consultative body that advises the archbishop on matters of importance.

In a statement to the media, the Archdiocese confirmed the removal of the four priests from the Presbyteral Council but declined to provide further details on their removal.