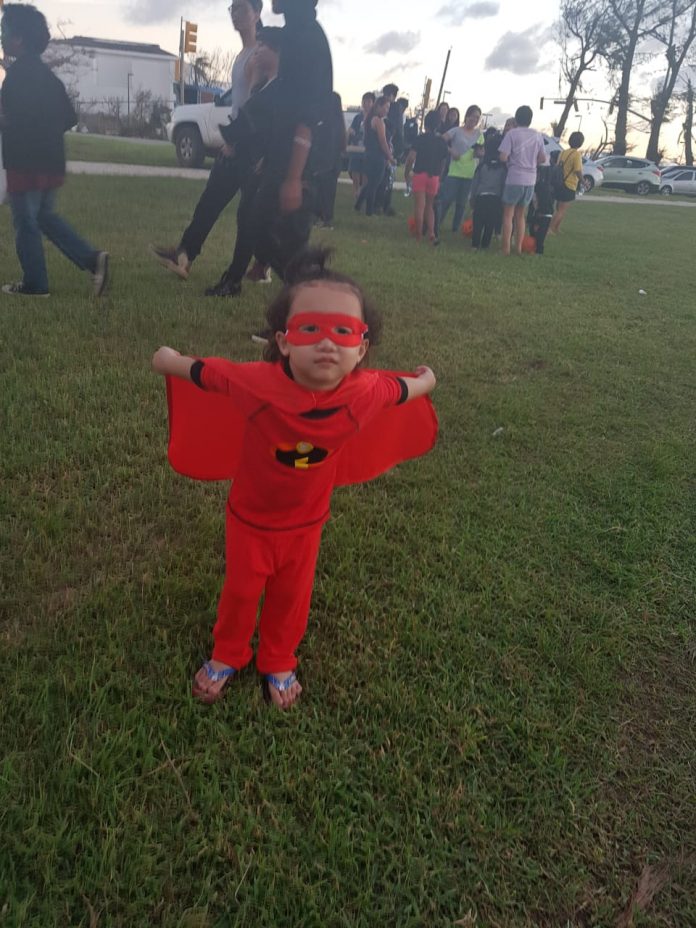 Gleeful laughter, genuine joy and youthful excitement comforted the community, drowning out the devastation riddled throughout the typhoon-ravaged islands of Saipan and Tinian.

October 31st, Halloween 2018, the annual trick-or-treating tradition lives on and insights some sense of normalcy after the most powerful storm in U.S. history rips through the two northernmost islands of the Marianas.

It started from a social media post, made by Leni Leon, a local photographer from Saipan who has been capturing and sharing the community’s growth and recovery post-Super Typhoon Yutu. 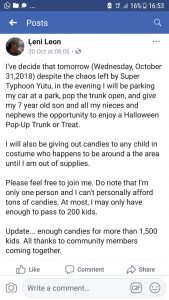 By 4 pm Halloween night, hundreds of parents and children flooded to Civic Center Park on Saipan and popped open the trunks of their cars to uphold the trick-or-treating tradition.

Dressed as PNC’s chief photographer Allan Balbin and he, dressed as PNC’s reporter Joycelynn Atalig, together we drive to the park and join in on the celebrations. There we met up with Leon who shared with PNC, the heartwarming story of his son.

He took his son to watch Black Panther one night, after which he marveled at the little boy’s admiration of the Hollywood superhero. Weeks before Halloween Leon purchased a Black Panther costume for his son, one he could not wait to take him trick-or-treating in.

Then, Super Typhoon Yutu ripped through the islands and left residents wondering whether or not any sort of trick-or-treating could actually be enjoyed this year. That’s when Leon took to social media which resulted in a day for all to enjoy, including PNC.

However, this event was not the only one of its kind on Saipan. We take a drive through the heart of Garapan and witness families in costume, walking by downed trees and power poles with bags and baskets of candy in tow.

October 31st this year was certainly a testament to the resiliency of the people of the Marianas.