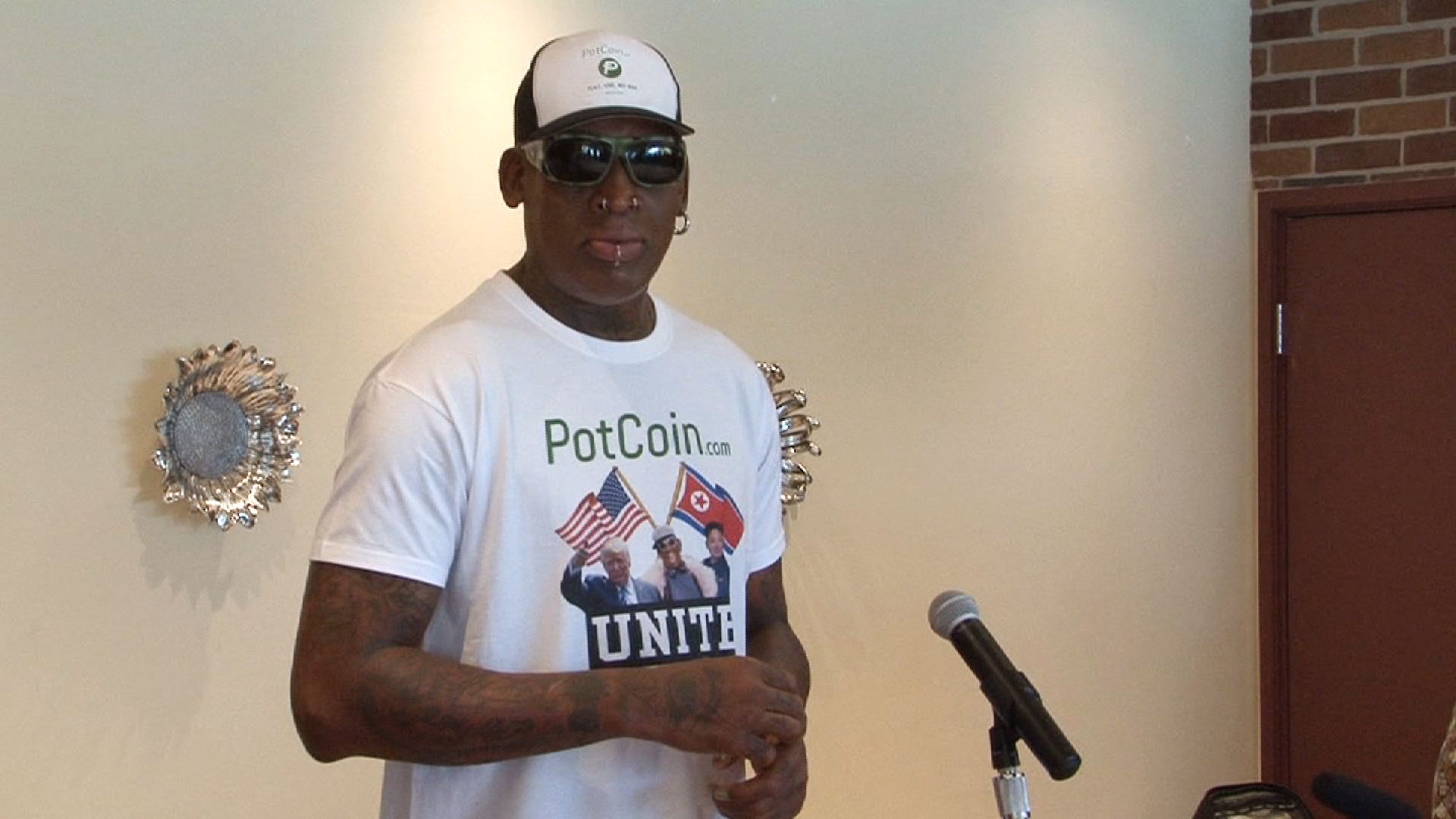 Retired NBA star Dennis Rodman is on Guam to spread goodwill. He says it is his mission to unite North Korea and the United States.

Donning a potcoin.com t-shirt with a picture of President Donald Trump and Kim Jong Un, Rodman told reporters he came to Guam as a part of his mission to unite America and North Korea. “I just came here to try and see if I could bridge the gap and show the leader of North Korea that I’m not afraid to come here even though if something even happened I’ll be here for Guam. If anything happens I’ll be here. If you guys can take the punishment I’m gonna take the punishment too,” said Rodman.

In August North Korea made empty threats to shoot missiles off the waters of Guam in response to President Donald Trumps remarks that North Korea should stop threatening the U.S. or face “Fire and Fury.”

Rodman doesn’t believe anything will happen. “This is gonna calm down. There ain’t gonna be no bombing ain’t gonna be nothing like that,” said Rodman. The former NBA rebounding phenom has described Kim Jong Un as a friend of his. A friend he says does not want war with America. “To me I always say he’s a big kid. We always talk about basketball that’s all we talk about is basketball. No politics no nothing about America against North Korea we don’t talk about stuff like that. It’s always very light. To me he does not want to have war. The way he talks to me he doesn’t want to have war at all. It may sound like that on the news but I see that Donald Trump and him is more like two big kids. Who is the toughest? Because I don’t know why he would even in my eyes remotely even think about bombing anything in the world. I’ve never heard of him say it in my face and we talk all the time,” said Rodman adding, “I believe the more we talk he does not want to bomb anybody. He does not. And I’m telling you straight from my mouth. He don’t wanna do it.”

Rodman plans on traveling back to North Korea and meeting with its leader soon. PNC asked, “If you could say one thing to him about Guam what would you say?” “I can’t do that. I can’t sit there and sit down and talk to him as a politician I cannot do that because our relationship is all based on sports. I don’t want to ruin that connection because I think he likes me so much because I don’t do that,” replied Rodman adding, “If those things pop up ok great we can ask him or gradually get into that, but I think that would be a bad move for me just because of the tense situation right now.”

Rodman choked back the tears when he spoke about the lengths he would go to unite America and North Korea. “I would sacrifice my life…for those two guys to get together. I would go there and put my life on the line,” he said.

Rodman says that President Trump has not given him any messages to carry to Kim Jong Un but the North Korean leader has given him messages to carry back to Obama when he was President. Rodman said Kim Jong Un asked for three things from America but he declined to say what those three things were. However, Rodman previously told ABC News one of the messages for Obama was about moving some of America’s ships farther away from North Korea.

He also says President Trump has not spoken to him directly about North Korea. “Trump won’t speak to me about this unless he put his guard down and say Dennis you know I’d like to talk to you. But I’ve always told Trump I said Trump I’m here. I know a lot of things that you don’t know. I said one thing if you want to know some things call me let’s talk about it,” said Rodman adding, “Well we all know that Donald Trump has a big ego. He won’t share the stage with anyone. I love Donald Trump we’ve been friends for years and years. He gave me a lot of opportunity to do a lot of the things I am doing right now.” In fact, Rodman has thanked Trump for making his last trip to North Korea possible.

Ultimately Rodman is bringing with him a message of peace. “Peace love and no war,” said the retired NBA player.

His trip to Guam and his last trip to North Korea was funded by potcoin which is a crypto currency originally developed as a means for transactions within the marijauana industry. Rodman says he’s not getting paid for this trip and is simply doing this out of the goodness of his heart. Rodman says he’ll come back to Guam adding hes just a phonecall away.

January 23, 2022
@PNCGUAM INSTAGRAM
Omicron is on the island. Now what? By Ceejay Pil