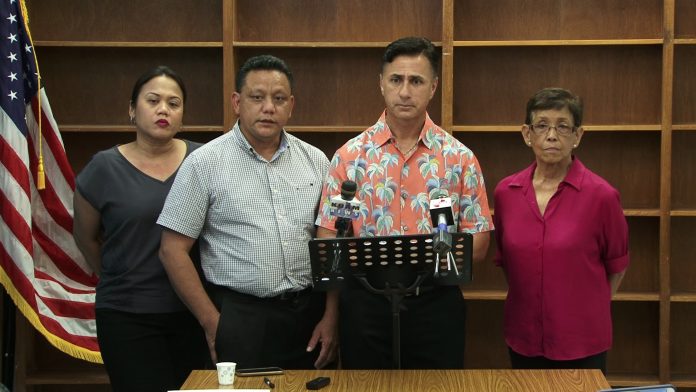 The libel and slander lawsuit was filed this morning at the Superior Court of Guam.

Guam – The four alleged sex abuse victims of Archbishop Anthony Apuron have taken the first step in taking him to court. They filed a lawsuit today alleging slander and libel. Also named in the suit is the Archdiocese of Agana.

“We did this because we want the truth to be public and to defend our honor and integrity,” states Walter Denton during a press conference today announcing the filing of the lawsuit.

The lawsuit was filed this morning at the Superior Court of Guam. But the lawsuit centers around spoken and written words. Roy Quintanilla, Walter Denton, Roland Sondia and Doris Concepcion on behalf of her deceased son, Joseph Quinata, filed a libel and slander suit. The named defendants are Archbishop of Agana, a Corporation Sole, which essentially means the Archdiocese of Agana, and Anthony Sablan Apuron, in his personal capacity. The lawsuit also leaves room for more defendants to be named, says Denton.

“We want Anthony Apuron, the Agana Archdiocese and all those involved to take responsibility for their actions,” he says.

The suit stems from allegations that were made against Archbishop Apuron of sex abuse. Quintanilla and Sondia claim they were sexually abused by Apuron, while Denton says Apuron raped him. Concepcion says her son revealed on his deathbed 11 years ago that he was molested by Apuron. The alleged sex abuse all happened in the 1970s at the Our Lady of Mt. Carmel Church in Agat where Apuron served as a priest.

“What Anthony Apuron did to us and to Sonny was unforgivable. As bad as his actions were, their actions toward the victims now are just as unforgivable. Instead of conducting an honest, transparent investigation, they called every single survivor a liar. Instead of using church resources to reach out and help victims, they called us liars,” argues Denton.

The plaintiffs are seeking general damages of $500,000 each, making it a $2 million lawsuit. The suit details each and every incident in which the church and Archbishop Apuron allegedly made statements that rise to the level of libel and slander.

You can read the lawsuit by clicking on the file below.

Cultural leaders throughout Micronesia to present at conference

5 ways to get along this Thanksgiving, even with those you may not like

Outdoor electric winter wonderland opening for the holidays in Hagåtña

New COVID cases drop to single digit: 9 out of 260 tested; hospitalizations down