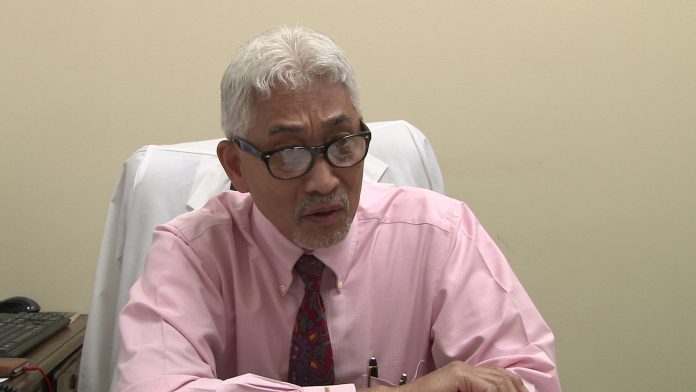 Dr. Ricardo Eusebio also sits on the board of directors for the Redemptoris Mater Seminary.

Guam – Redemptoris Mater Seminary Board of Directors member Dr. Ricardo Eusebio says he does not trust the ad hoc committee report on the RMS issued by Father Jeff San Nicolas yesterday. Dr. Eusebio says the report was prepared by a committee that is biased.

We met with him today to get his reaction to Father Jeff San Nicolas’ statement yesterday in which Father San Nicolas connected for the first time Archbishop Anthony Apuron to the neocatechumenal way. Dr. Eusebio says he has no response for such allegations from Father San Nicolas. But he does have a few words to say about an ad hoc committee report Father San Nicolas released to the media yesterday despite orders from his superiors not to do so.

The report is on the RMS and is 141 pages long. It confirms some of the suspicions many have had about the Yona seminary’s practices and its strict ties to the neocatechumenal way.

Although Dr. Eusebio admits he has not had a chance to read the full report, he responds to some of the allegations contained in it. For example, the report states that the RMS purports to follow on paper the Program for Priestly Formation when considering incoming seminarians, but by practice, they don’t follow the PPF guidelines. As a result, “A major consequence of an inadequate evaluation process calls into question the quality, accuracy and overall integrity of any evaluation decisions which subsequently may lead to the progression of candidates to ordination who are not ready and do not meet the standards and expectations articulated in the PPF, nor have the concurrence of the faithful.”

Dr. Eusebio also points out that the seminary is accredited differently and therefore their educational standards will be different.

“The seminary here in Guam is one that is accredited by the Lateran University and so follows a different sort of path than somebody who is accredited by a university in the United States,” he pointed out. “It’s not like somebody enters the seminary at one stage and then four years, five years, six years, eight years later are ordained. For some it’s 10 years, for some it’s 15 years. It depends. It depends on their maturation. It depends on their spiritual formation.”

“Even a criminal who has committed a crime, is accused of a crime in the court system is deemed innocent until proven guilty. Yet here we have the presbyteral council, Father Jeff assuming that Archbishop Apuron is already guilty and that he should be removed? I think it’s a shame,” he said.

PNC: “Do you have an opinion yourself on the innocence or guilt of Archbishop Apuron?”

Mass schedules for March 6 to 7, the third Sunday of Lent

COVID vaccination age eligibility still at 55, but may be lowered soon

Guam cleared of tsunami threat; residents advised to stay out of water

Regular gas rises to $4.19 per gallon

Amid a pandemic, a blowout epidemic also happening in NBA

Guam cleared of tsunami threat; residents advised to stay out of...

Mass schedules for March 6 to 7, the third Sunday of...

The Department of Administration opened applicatio

Residents flock to the ‘Food Truck Festival’ a

The Guam Fire Department responded to an auto-cras