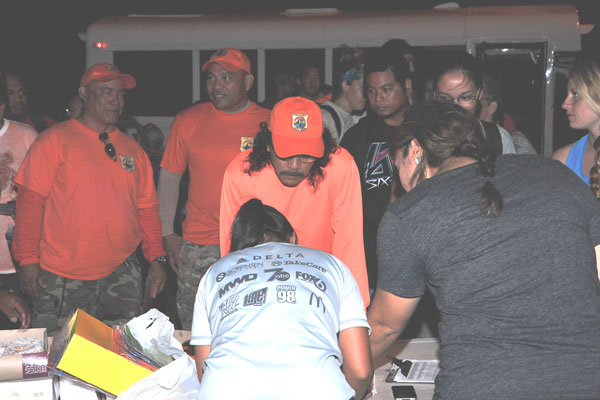 The bats, which dwell on Guam and throughout the Commonwealth of the Northern Mariana Islands, have fluctuated between threatened and endangered for the past several decades. While researchers are certain the Mariana fruit bat, commonly referred to by the Chamorro name of fanihi, population has been in a steady decline since the beginning of observations, there was no accurate population count backed with strong scientific procedures and evidence until now.

“We have covered 100 times the survey size [with this amount of people] in one day compared to the surveys that have been done every month [by a single person] for the past 10 years,” said Tammy Mildenstein, Andersen AFB Fanihi Count Program principal investigator. “For Guam, or anywhere, bat surveys wouldn’t really be successful unless you do it in large groups at the same time.”

[More than 100 volunteers gather before sunrise to receive their location assignment to monitor Mariana fruit bats flying around Andersen Air Force Base, Guam, July 3. The volunteers were assigned to 51 locations on the base during the early morning hours in hopes to sight the threatened species as they returned to their roosting spots for the daytime. (U.S. Air Force photo by Staff Sgt. Melissa B. White/Released)]

Mildenstein said this was the first time a bat survey has ever been done in this manner, partly due to the fact most bat species roost in colonies, making it easier to track them because they live together in one spot. Monitoring the Mariana fruit bat requires a different strategy. They used to be recorded on the base as a colony that lived together at Pati Point Preserve on the base. However, the decline throughout the years has minimized and dispersed the bats on Guam, which makes them more difficult to track since they fly solo and live in different areas. This species has become so rare and threatened as a result of poaching and illegal consumption, human disturbance, habitat loss, and the invasive brown tree snakes.

In order to find the sparsely spread bats, the base sought out volunteers from within the gates, but also throughout the local community and the University of Guam. With an original expectation of 35-40 volunteers, the 36th Civil Engineer Squadron Environmental Flight received more than 100 responses from across the island to support Andersen’s conservation effort.

“Everyone said we wouldn’t get enough volunteers, but the support we got shows people care about the future of the fanihi,” Mildenstein said. “I think it’s great that our pilot project is something never done before and that it brought these different institutions together that normally don’t have the opportunity to work together.”

The volunteers were assigned to 51 locations on the base and at Ritidian Point during the early morning hours in hopes to sight the mammals as they returned to their roosting spots for the daytime. All 51 locations were areas bat sightings have been positively recorded in the past.

Ruben Guieb, 36th CES Environmental Flight Natural and Cultural Resources Conservation Program chief, said he was pleased to hear of positive bat sightings on base that morning, but the official results of the survey will be released in August and that the plan is to repeat the survey in a similar manner annually.

While the survey only included Andersen property, Guieb said there’s a good argument that it would be the most probable place for the bats to live on the island, considering the habitat management units being built on base to protect the threatened species from invasive creatures along with healthy limestone forests. The base is also the location on Guam in closest proximity to Rota, an island nearly 40 miles to the northeast, where fishermen on boats between the two locations have witnessed bats making direct flight between the islands.

“The bat has cultural value to the people of Guam,” said Guieb. “And now, with this baseline survey using strong, quantitative science, we can track the trends of population to see if our programs are helping with the recovery of the species and minimize the impacts of the base missions on the environment.”