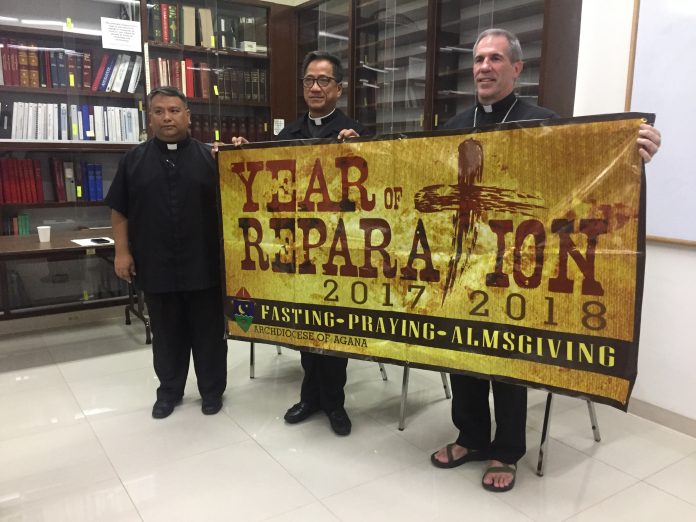 The Year of Reparations will commence Thursday night at 6 pm with a mass at the Cathedral Basilica.

Guam – While attorneys and organizations are work on getting justice for victims of church sex abuse, the Archdiocese of Agana is also embarking on a new initiative for “spiritual” justice.

Spearheaded by Archbishop Michael Byrnes, this endeavor will be called the Year of Reparation.

It’s not just the scores of sex abuse lawsuits that have rocked the church or the controversial dispute over the Redemptoris Mater Seminary property, or even the division between the traditional catholics and the neocatechumenal group, Coadjutor Archbishop Byrnes says problems exist within the community that are hurting the fabric of society like divorce rates, crime, child abuse and drug abuse.ltimately the metric of Christian success

“Ultimately, the metric of christian success is, do we see some of these social ills going down? Do we see more healing and less brokenness?” noted Byrnes.

“We sort of just reconvened a couple months ago and the very first matter the archbishop brought up to us was to have a year of reparation to how can we help him help the church in repairing the body of Christ,” explained Gofigan.

This Year of Reparation is similar to lent in which Catholics devote 40 days to prayer and fasting, except it will occur for about a year. Father Mike Crisostomo says the Year of Reparation will comprise of three elements: prayer, fasting and almsgiving.

“These are the three elements you’re gonna see perhaps throughout the whole parishes. We have banners that have been printed and are ready to go to the churches and to the schools to be able to announce this Year of Reparation. It ends on the feast of Pentecost next year so it’s not a total of 365 days but it is the year that we are focusing on in this time and moment of reparation,” Crisostomo explained.

Father Crisostomo says several events will be announced throughout the year beginning with tomorrow evening for a Year of Reparation mass at the Agana Cathedral at 6 pm. There will also be the First Friday Devotion and the Feast of Two Hearts. Parishioners will also be encouraged to volunteer their time and efforts to organizations dedicated to helping the less fortunate.

“I would  hope that as we get the word out about the idea of reparation that there’s still atonement and the spirit of justice that is being communicated and that we are truly in solidarity of those who’ve been victimized. You know the church, as we acknowledged, has done wrong and now we are trying to make amends and reconcile and hopefully, justice will be served by–spiritual justice will be served by doing these acts of mercy,” said Crisostomo.

You can learn more about the Year of Reparation by visiting umatuna.org.